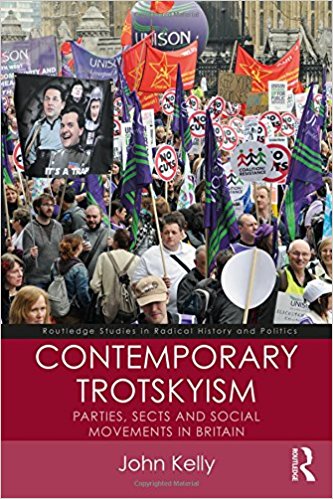 The first thing to say about John Kelly’s book is that I hope any future reprint has a better cover picture than the one on the current edition which features lots of balloons from Unison (not a union noted for its radicalism), the red flags of an avowedly anti-Trotskyist “Marxist-Leninist” group and precious few actual Trotskyists- unless those holding the Coalition of Resistance placards can be assumed to be such, rather than simply activists mobilised by their unions or anti-cuts groups.

At best this choice of image leads one to the conclusion that the book is poorly researched and the author does not know his subject, at worst that it is a Daily Mail style expose of Trotskyist infiltration and manipulation.

Nothing could be further from the truth!

The book is highly detailed, well researched and written and contains a wealth of details and statistics analysing every facet of the contemporary Trotskyist movement in Britain from the larger groups right down to the minuscule and obscure.

Kelly draws on a wide range of sources including interviews with more than twenty leading members of existing Trotskyist groups, their public press and internal bulletins, to produce a highly readable yet impressively detailed guidebook to contemporary British Trotskyism.

The first few short chapters set the scene by looking at the origins of Trotskyism and outlining some of its distinctive features.

Chapter 3 looks at the development of the Trotskyist movement in Britain from 1950 – 1985 and whilst this covers similar ground to John Callaghan’s “Far Left In Britain” the emphasis here (and throughout the rest of the book) is more on the trends in membership of the various groups, the frequency and number of publications over time and the timelines of various splits etc.

Chapter 4 then takes a similar approach with the 22 Trotskyist organisations identified as being currently active in England and Wales. The list is impressively complete and makes a serious attempt, from multiple sources, to estimate the membership of each group: from the SWP with a claimed 5,936 right down to the Lambertists and the RCIT on two apiece. On the way the WRP Newsline clocks in at 120- surely a gross exaggeration- and the Marxist World group which we had not previously encountered at 35 members.

A discussion follows which puts the SWP’s inflated figure into some context with the different demands of ‘membership’ across various organisations and traditions.

The chapter on “Doctrine, orthodoxy and sectarianism” includes a brief look at aspects of internal regime- sexual assault and rape allegations in the SWP and physical assault and thuggish internal cultures more generally (p100) as well as the domination of most groups by (aging) white males (p94) and leadership teams which remain stable for decades…

The first of these lists is highly idiosyncratic as Kelly groups Trotskyist groups in Britain into the following seven categories:

Clearly some of these organisations could be placed in a number of categories and some sit very uneasily together. The Institutional category appears to denote long-term strategic entrism of one sort or another and the Socialist Party, having long broken with this perspective is an anomaly here. What denotes the WIRFI as “Radical” is a mystery as the group might easily be better placed in the Orthodox or Workerist camps…

Some problems do arise when Kelly tries to get to grips with incomplete or contradictory information to discuss aspects of Trotskyist activity. On page 125 an attempt is made to use the number and frequency of European Trotskyist publications to deduce the membership figures of the respective groups. Kelly refers to the ability of the SWP and the SP as well as the AWL (at least an order of magnitude smaller than the largest British groups) to produce weekly newspapers. However, he also notes the WRP (Newsline) group has a daily newspaper despite being much smaller. Clearly this proxy model does not work well and I would suggest that for many Trotskyist groups the paper IS the party and as a group declines in number every effort of will is bent to the maintenance of it and to the keeping up of appearances. At best newspaper frequency is a (very) lagging indicator of a group in decline and, in the case of the Newsline at least, ability to produce the paper far outstrips the ability to sell or distribute it!

Another example of a similar phenomenon is to be found in the table giving numbers of ‘in print’ books for the publishing houses associated with the Trotskyist groups. Here the Communist League’s (membership 15) Pathfinder Press has 358 titles, outstripping the massively larger SWP’s Bookmarks operation with 215. The answer, of course, is that Pathfinder is run by the SWP(US) – an organisation itself living off legacies from the past- and the CL, which publishes nothing of its own, is merely its British distributor.

All niggles aside, this is an excellent book and a more considered and detailed review may be forthcoming when I have fully digested it.

Thanks to Dave O for providing us with this review copy.

View all posts by Rob M

Splits&Fusions will showcase documents from the various tendencies of the Trotskyist movement in Britain and related tendencies of the far-left in its broadest sense. Items will be presented without editorial comment, beyond a brief description of the group. We welcome pointers to material we may have overlooked. We would like to hear from anyone who can fill gaps in our collections. Donations of materials are always welcome, as are loans- we will scan and return anything sent safely and promptly..